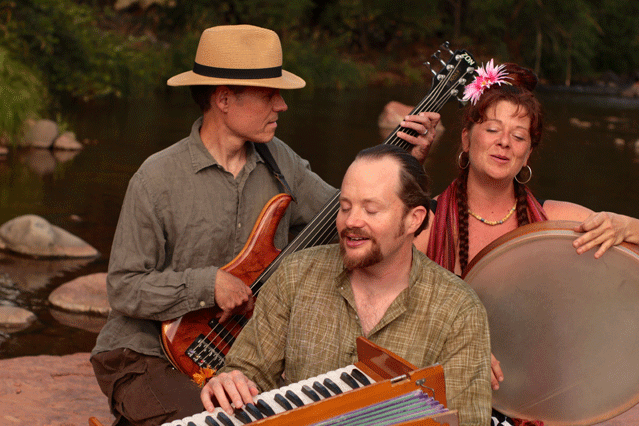 When most people see the words ‘yoga’ and ‘music’ in the same sentence they might think of wind chimes, crystal bowls, synth pads, and dolphin sounds. But for the better part of a decade New Orleans-based Sean Johnson And The Wild Lotus Band (Alvin Young and Gwendolyn Colman) have been changing this perception, reinventing the yoga soundtrack by merging ancient mantras, rock, funk, gospel and world grooves. Their dynamic sound has won over yogis and non-yogis alike and transformed hundreds of yoga studios in America and Europe into thriving concert and dance halls. They are regarded as one of the most distinctive guiding voices in western kirtan music.

In 2007 they released their first album Calling The Spirits independently which caught the ears of pioneering Canadian record executive Terry McBride, founder of Nettwerk Records and Lilith Fair. In 2009 McBride signed the band to Nettwerk for the release of the follow up album Devaloka engineered and co-produced by Misha Kachkachishvili in New Orleans.  When Putumayo World Music founder Dan Storper heard Devaloka he chose music off the record to be featured in a series of Putumayo releases which include tracks from international artists designed to accompany yoga practice (Yoga, 2010, World Yoga, 2012). Storper also hired Sean to co-curate the albums and write the liner notes. These albums helped propel the band’s music to listeners across the globe. Their songs have also appeared on the Sounds True and White Swan labels.

On August 19th, 2014 they will release their third studio album Unity. White Swan Music describes the album as “A collection of ten unique. soul-stirring songs that reveal the band more at ease than ever with interpreting and expressing mantra music through the guts and authenticity of their own American roots. The album takes the listener on a revelatory journey through myriad sounds and flavors – from bellydance rhythms, Motown-inspired grooves, back porch stomp and gospel chorus to trance-inducing eastern strings with passionate verses from Rumi, tantra yoga sutras, and chants from a variety of spiritual traditions. Some songs are perfect for a yoga flow playlist and other for simply savoring life, at full blast.”

Sean, Alvin, and Gwendolyn tour as a trio and play ninety dates a year across the U.S. They are a favorite headliner at yoga and music festivals nationwide. In 2010 they were the first kirtan band to ever play The New Orleans Jazz Festival to a large and appreciative crowd. Their debut at Jazz Fest was noted by Alex Rawls at Offbeat Magazine and chronicled in the international online magazine Elephant Journal. They were invited back to the Jazz Fest stage in 2014, where GoNOLA.com named them “Top Pick For Day 2 Of Jazz Fest” along with Robin Thicke, Phish, and Robert Plant.