“Their music will ignite the world…a hybrid of East and West that will bring joy to your heart and get your body boogieing.” – Yoga Chicago

For the last sixteen years, New Orleans-based Seán Johnson And The Wild Lotus Band (Alvin Young and Gwendolyn Colman) have been putting a New Orleans and American stamp on spiritual music by merging ancient mantras from the traditions of yoga, global chants, conscious lyrics, roots, rock, gospel and world grooves. Brought together in September 2005 initially as a creative, philanthropic touring music project in response to the destruction of Hurricane Katrina, they have gone on to become an inspiring and influential presence within the realm of world devotional music. With honor and appreciation for the deep roots of sound and chant from India’s yoga traditions and sacred chants from around the world, they seek to create authentically relatable spiritually-based mantra-centric music accessible to all. The band’s music is a vehicle to create a revelatory journey that deepens connection, fosters healing, and moves people’s hearts through music.

In 2007 they released their first album Calling The Spirits independently which caught the ears of pioneering Canadian record executive Terry McBride, founder of Nettwerk Records and Lilith Fair. In 2009 McBride signed the band to Nettwerk for the release of the follow up album Devaloka engineered and co-produced by Misha Kachkachishvili (Esplanade Studios) in New Orleans.  When Putumayo World Music founder Dan Storper heard Devaloka he chose music off the record to be featured in a series of Putumayo releases which include tracks from international artists designed to accompany yoga practice (Yoga, World Yoga, and Yoga Lounge) .   These albums have helped propel the band’s music to listeners across the globe. Their songs have also appeared on the Sounds True and White Swan labels.

In August 2014 they released their third studio album Unity. White Swan Music describes the album as “A collection of ten unique soul-stirring songs that reveal the band more at ease than ever with interpreting and expressing mantra music through the guts and authenticity of their own American roots. The album takes the listener on a revelatory journey through myriad sounds and flavors – from belly dance rhythms, Motown-inspired grooves, back porch stomp and gospel chorus to trance-inducing eastern strings with passionate verses from Rumi, tantra yoga sutras, and chants from a variety of spiritual traditions. Some songs are perfect for a yoga flow playlist and other for simply savoring life, at full blast.” Unity received much critical praise and debuted #1 on the iTunes World Music Chart and #3 on Billboard’s New Age Chart.

In 2021, they’ll be dropping their new album titled Mystery on Be Still Records, with 10 new songs that will be released throughout the year.

Seán, Alvin, and Gwendolyn tour extensively as a trio and are a favorite headliner at music festivals, including many spiritual, yoga, and conscious music gatherings nationwide. In 2010 they were the first kirtan band to ever play The New Orleans Jazz Festival to a large and appreciative crowd. Their debut at Jazz Fest was noted by Offbeat Magazine at the time, and chronicled in the international online magazine Elephant Journal. They were invited back to the Jazz Fest stage in 2014, where GoNOLA.com named them “Top Pick For Day 2 Of Jazz Fest” along with Phish and Robert Plant. In 2015, they made their third trip to the Jazz Fest stage to share the joy and power of their New Orleans-crafted mantra music and their set was featured in the Huffington Post, Bhakti Beat, and My Spilt Milk. 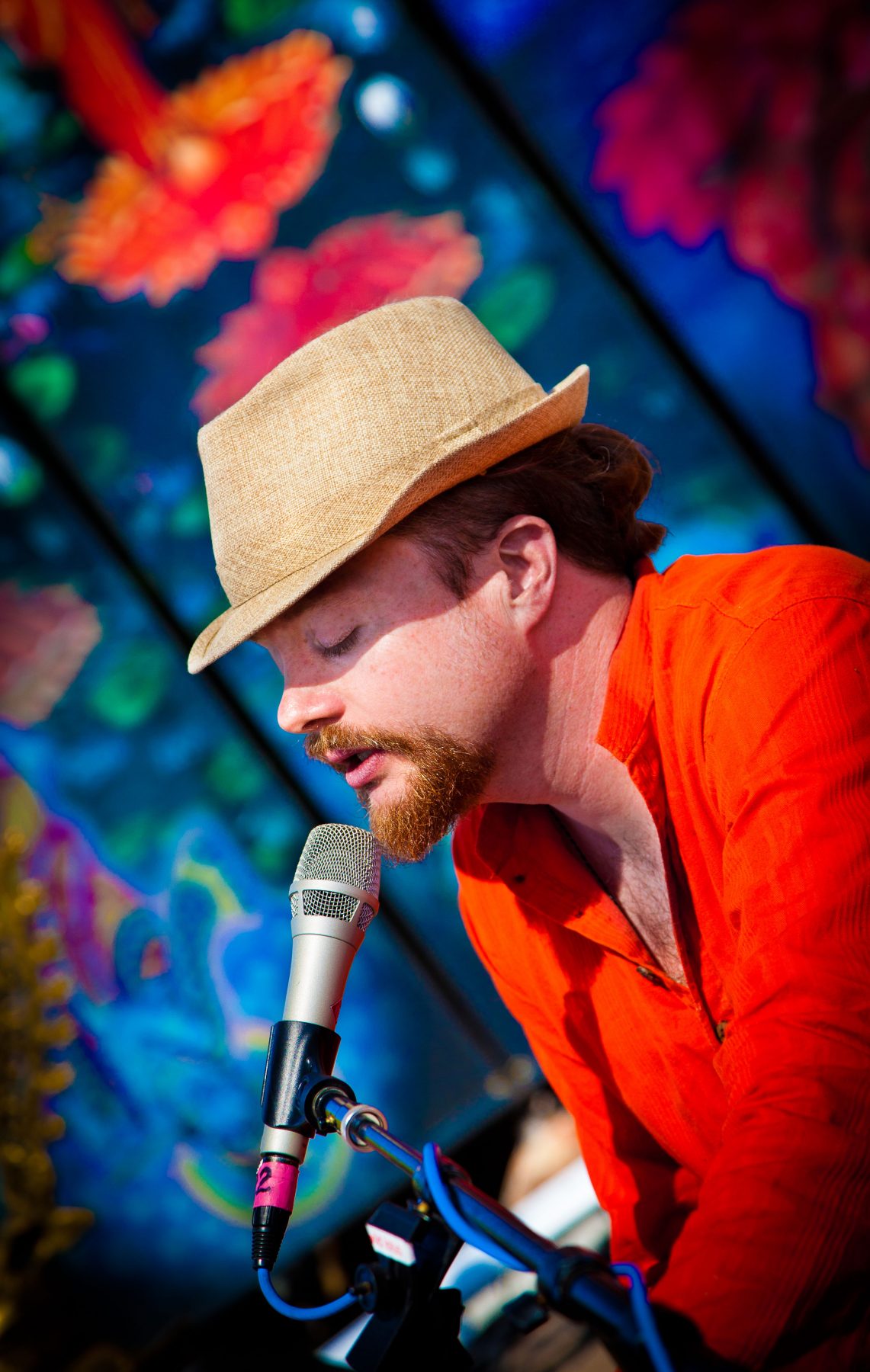 Seán’s intimate, intuitive connection to the spirituality of music, singing, and songwriting goes back to his childhood. He was a member of the New Orleans Symphony Children’s Chorus and active in musical theatre. After a traumatic performance experience as an adolescent, he quit singing in public for many years and found his voice again in his early twenties by connecting deeply to his Irish ancestors through singing traditional sean-nos songs in a year long Irish Studies program at The Evergreen State College in Olympia, WA, guided by ethnomusicologist Seán Williams. Williams shared songs that she had learned directly from Joe Heaney, considered to be one of Ireland’s greatest singers. In an intensive program focused on heart-centered spiritual traditions guided by Doranne Crable, Seán was introduced to the Sufi practice of dhikr,  a powerful chanting practice that deepened his connection with the voice as a vehicle for spiritual transformation.

After focusing on Comparative Spiritual Traditions in his undergraduate studies, Seán went on to complete a Master’s degree in Creation Spirituality from The Naropa Institute-Oakland (1999) with focus on teaching chant as spiritual practice, apprenticing there with south Indian musician and teacher Russill Paul, author of The Yoga Of Sound. In 1999, Seán moved home to New Orleans, sharing weekly chanting sessions, and founding several spiritual music ensembles, introducing many people to the practice of chanting. In 2005 he founded The Wild Lotus Band as a post-Hurricane Katrina philanthropic music project, raising funds across the country for relief from the devastation of the storm through benefit concerts. Chanting mantras has been a deep and integral part of his personal spiritual practice, music, and teaching for the last 25 years. Singing Irish music and connecting to his Irish ancestors remains a pillar of his life and spirituality. He guides online gatherings and retreats in Ireland with Mary Meighan, founder of Celtic Journeys each year.

Gwendolyn Colman brings a unique ethnic sound to the band with years of experience drumming with middle eastern ensembles, flamenco troupes, and avant garde bands. Her percussion dashboard includes frame drums, cajon, doumbek, udu, calabash, hooves, shakers, kanjira, high hat, kick drum, triangle, and karkobs– playing with merging ancient rhythms with a modern urban flare. Her powerful vocals are influenced by early opera training. She is loved for her soaring, soulful singing, uncanny ability to interweave rhythms and grooves with all of her limbs, and her adventurous, passionate, mischievous spirit that brings rhythmic intricacy, deep feeling, and wild and earthy flavors to the band’s vibe. 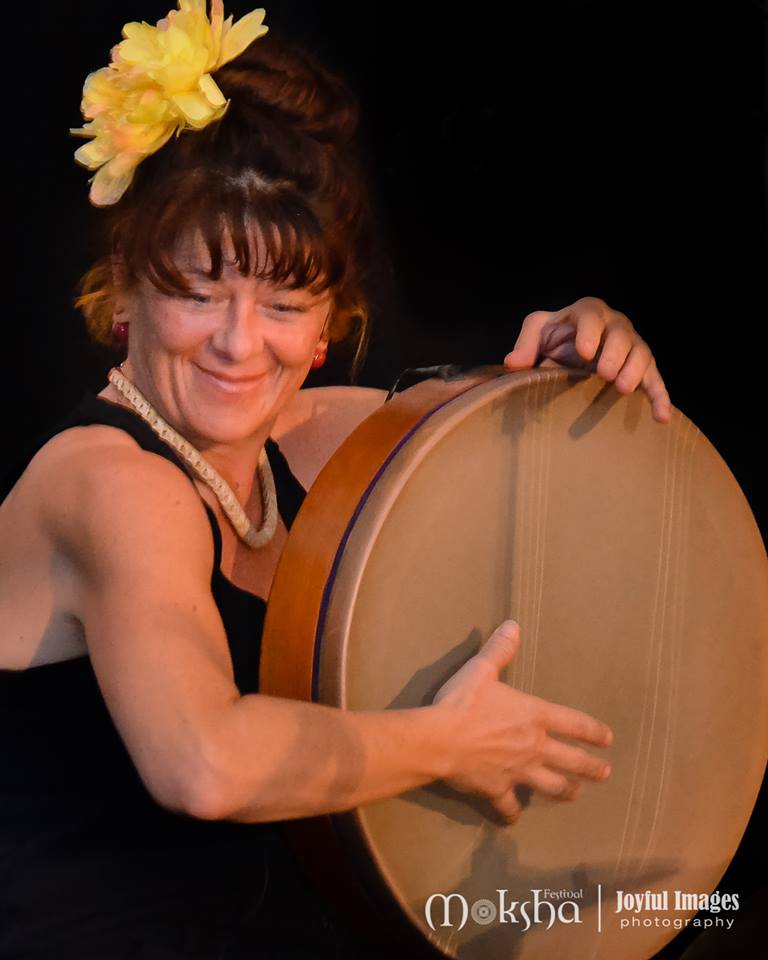 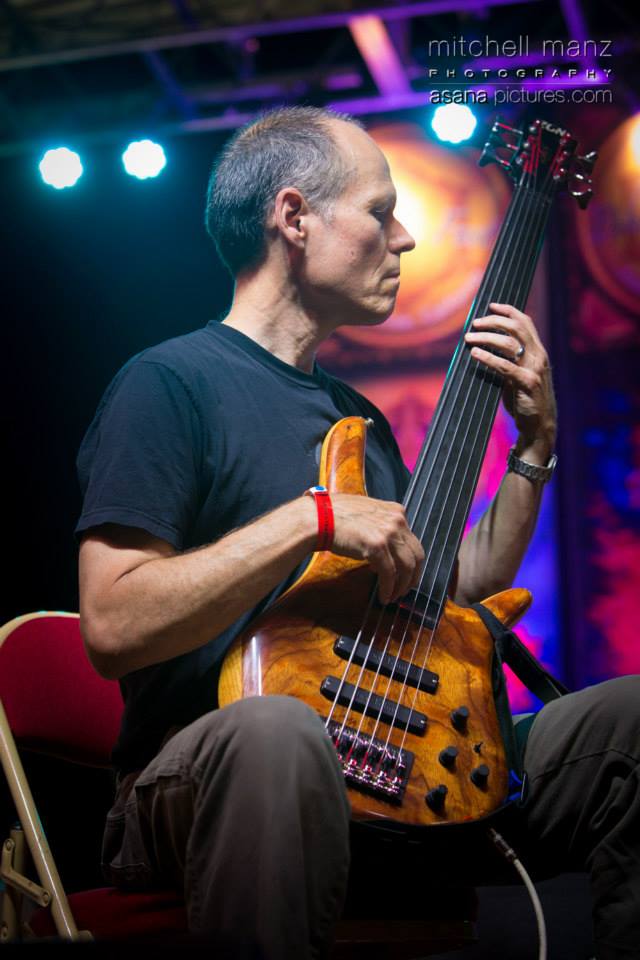 New Orleans’ native Alvin Young spent years on the Crescent City music scene playing with Wynton and Branford Marsalis, local legends James Booker and James Black and many more. His voice on 6 string fretless bass and guitar weaves the jazz, rock, classical, and folk styles he’s been immersed in for the last 40 years. The hallmark of Alvin’s expression on the bass is a rare and deeply melodic quality that illuminates the band’s songs. Alvin is loved for his dedication, devotion, and knowledge of music as a deep craft, a spiritual path, and a form of service. Inspired by the richness of his life and education in music, he brings a treasure trove of musical gifts to each song that deeply define the band’s sound.